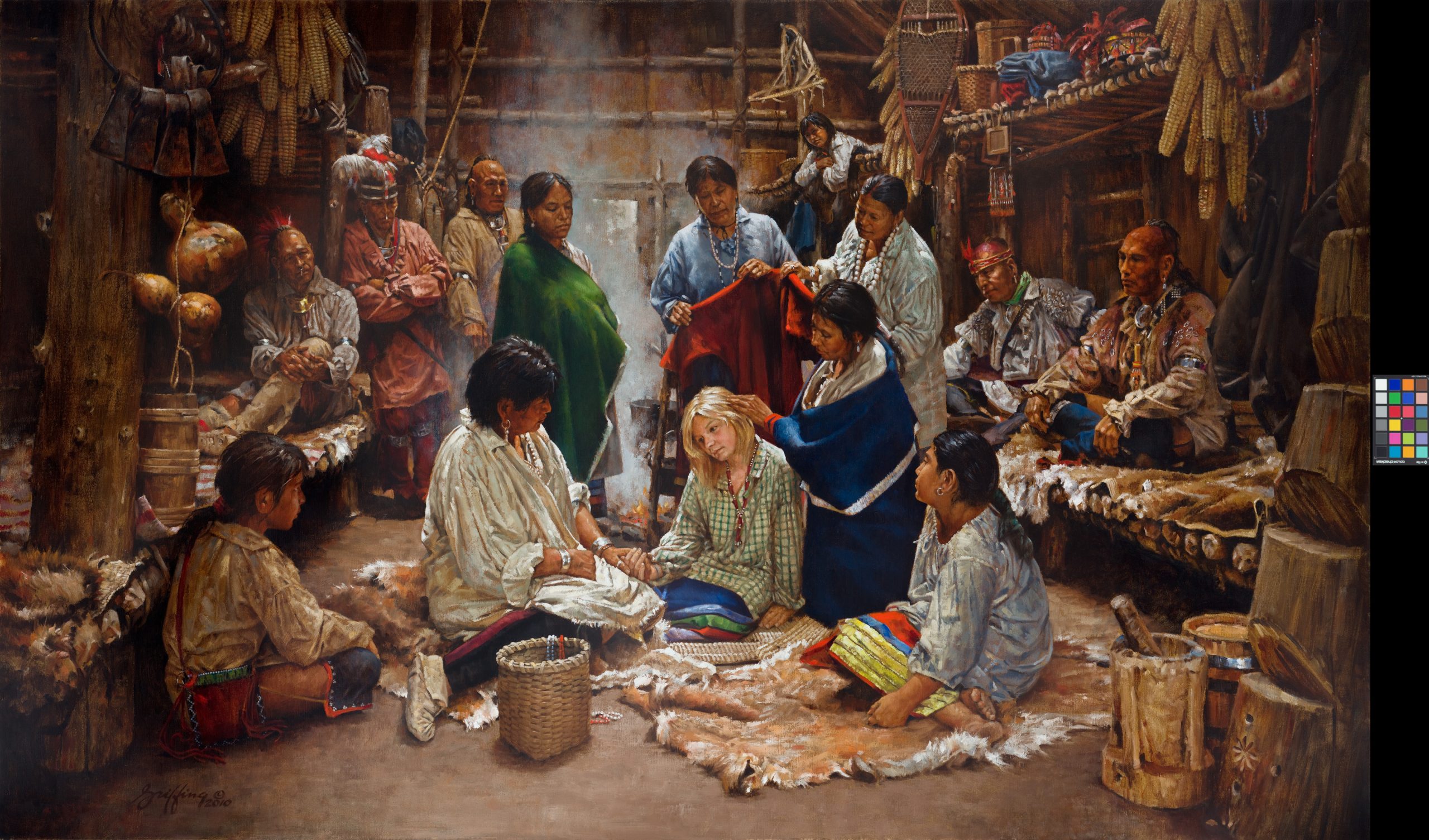 The Adoption of Mary Jemison

Much has been written about Mary Jemison, her captivity and her lifelong adoption into a Seneca family. The painting focuses on her transformation from young Scots-Irish immigrant into a Seneca woman with all the rights and responsibilities of full clan membership. Seneca women had long held the authority to grant citizenship to foreigners as well as the ability to remove it. Mary and her family were illegally squatting on Haudenosaunee territory in 1754 when they were attacked and the majority of her family killed by Shawnee. Mary and her brother were spared. She was eventually given to the Seneca and she was enfolded into their community entirely.

Mary was given a new name, Degi’wănăhs, which means “two women’s voices wailing or falling” and a new family with brothers and sisters and clan relatives. She lived among them for her entire life, through wars, dispossession of their lands, as a refugee from the Sullivan-Clinton invasions and eventually as a landowner retaining her identity as a Seneca woman. Her narrative written by James Seaver in 1824, “A Narrative of the Life of Mary Jemison” remains the best version of Seneca life as recorded by a woman to date.

In the painting, we see Mary as the young teenage captive at the moment of her transformation and adoption. The Seneca women are conducting the ceremony with great care and tenderness. The process of adoption was often traumatic and so the ceremony was meant to sooth the spirit and body. Inside the longhouse, the family looks on in approval; even the children are eager to invite their new sibling into the fold. The model for Mary incidentally, Savannah Duemmel, is herself from the famous Mohawk Terrance family.

Mary, in her waning years, was forced to sell off her precious lands at “Gardeau Flats” and lived at Buffalo Creek. Laura Wright, the wife of Asher Wright, missionary to the Seneca, worked among the Seneca at Buffalo Creek to bring the gospel to them. During her time there as missionary, she visited with Mary Jemison at her bedside and began to collect information from Mary about her life and then after Mary’s death, she collected information from others who knew her intimately. She even drew a portrait of Mary which hung on the mantle of Asher Wright’s home. Both the notes and the portrait now reside in the special collections of the Seneca Art & Culture Center at Ganondagan. Excerpts from the unpublished notes are printed here for the first time.